What Will Your Man be Wearing? 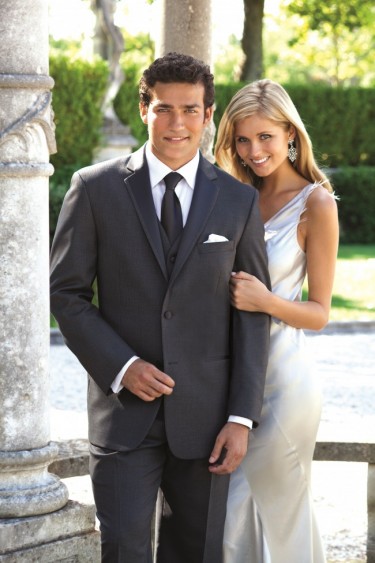 Choosing a bridal gown is a major undertaking. So many considerations — from style through color to price — come into play, it’s enough to make anyone’s head spin.

Guys, on the other hand, usually just end up in a tuxedo. But if you want to look your best on your wedding day, there are still some simple guidelines to follow. I spoke recently with the owners of two of the Lehigh Valley’s premier men’s formalwear stores, who filled me in on what the well-suited groom is wearing this year.

The favored fabric is still 100% wool, most often in the super 100-120 range.  That number simply indicates the fineness of the wool itself, not its quality. “It’s a lighter, softer wool,” says Ron Kahan, owner of Top Hat Formalwear in Whitehall.

As far as color goes, it’s hard to go wrong with basic black.  “Gray is also popular,” says Marty Semmel, co-owner of C. E. Roth Formal Wear in Allentown. “They’re usually in lighter shades to avoid looking like a regular suit. White and off-white tuxedos are available, too.” Kahan adds, “I’ve also seen some grooms choose a white shawl-collar jacket with black satin trim on the lapels, and pair it with black trousers.”

Both men agree that slimmer silhouettes are hot.  Semmel says, “More people are biking and running, so they’re in good athletic shape – and they want to show it off.” That’s why you’ll find jackets that fit snugly in the torso; pants feature trimmer legs.

Look for some light texturing, too, or perhaps tone-on-tone stripes, to add a bit of visual depth, unlike a flat business suit.

Single-breasted jackets are the norm, and most feature simple closures.  “For a while, jackets were longer, and three-, four-, even five-button styles were popular,” Kahan says. “Today, we’re back to ones and twos.”

The overall look is rather muted. Satin-covered lapels – a former tuxedo hallmark – have become satin-edged, with a more-matte finish. In many cases, the traditional satin trouser stripe is gone, as well.

Popular lapel styles include notched (similar to those on the typical business suit), peaked (with a point extending beyond the rest of the lapel), and the shawl, which drapes in a continuous curve.

And never pair a tailcoat with a long tie. 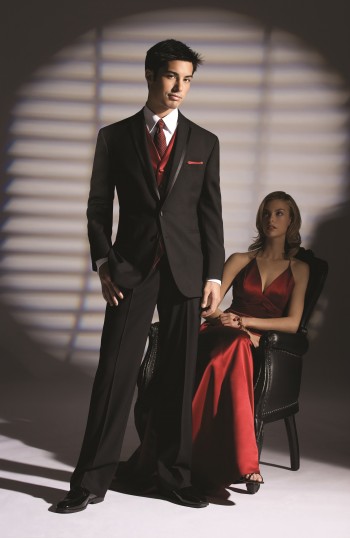 Long ties with tuxedoes? Semmel traces it to America’s changing dress code. “It evolved from suits and ties to ‘casual every-day.’ Nightclubbers adopted suits and ties to set themselves apart. So when it comes to tuxedoes, many men are more comfortable with long ties, and think bow ties are a bit over the top.”

But traditional bows are reasserting themselves. Semmel says about 50% of his prom patrons chose bow ties this year, and younger guys tend to be trend-setters.

“Destination weddings are often held on islands or beach resorts,” Kahan says, “and the atmosphere is usually a bit less formal.”  In keeping with those sandy tones, tan is the preferred color – but the tux often sports so little trim, it could pass as a regular suit.

Semmel agrees with the color, but adds that some resorts also have specific wedding venues and rules – so plan accordingly. “You might get married on the beach, wearing just the shirt and pants,” he says. “But the reception hall could require a jacket and shoes.”

Vests, cummerbunds, pocket squares and ties can add welcome splashes of color to your ensemble – especially if you match them with the bride’s colors.

For a long tie, stick with a vest and a flat-collared shirt, Kahan says.  Bow ties can be worn with either the traditional wing collar or a flat style, adds Semmel, with flat collars in the lead (for now).

Plain-fronted shirts still rule, although pleats and ruffles are beginning to creep back. Either will help you tuxedo look less like business wear. Cuff links and shirt studs – usually in black or smoky gray, and always when wearing a bow tie – are de rigueur.

Looking your best on your big day doesn’t have to be a chore, especially if you follow our experts’ guidelines. To make it as simple as possible, Ron Kahan suggests visiting a full-service formalwear store. “It’ll have everything you’ll need on the premises. Outlet stores must order certain items, and that carries the risk of late deliveries.”

But Marty Semmel sums it up best: “When your bride says ‘I love the look’ – agree with her!”

This may take a second or two.